EP46: The Murder of Jill Behrman Jill Behrman was mysteriously murder in 2000.  Three people confessed at different times to 46 other people that they killed Jill.  Yet another man was convicted of the crime.  His conviction was vacated in 2019.  So who is responsible for Jill Behrman’s death?

The Mysterious Murder of Jill Behrman

On May 31, 2000, Nineteen-year-old Jill Behrman, a business major at Indiana University in Bloomington, Indiana, logged off her computer at 9:32 am and went for a bike ride.  Jill was an avid cyclist who rode her bike daily.  A half-hour later she was seen near the intersection of Harrell Road and Moffet Lane in Southeastern Bloomington. Jill was a very fit young woman who had just finished her freshman year at the university and worked at the college at the  Student Recreational Sports Center.  She was scheduled to work later that day for three hours, from noon to 3:00 pm.  After work, Jill planned on meeting her father and grandparents for lunch.  But none of that happened.

Jill failed to show up for work that Tuesday and she never make it to the family lunch.  Later that evening, Jill’s father called the police and reported her missing.    Her family didn’t waste any time getting the word out about her disappearance.  They immediately distributed flyers and a volunteer search party started searching all the roads that Jill may have taken.

Two days later, At around 5 PM on Friday, the police located her $1,200 Cannondale bicycle.  It had been found in on the side of the road next to a cornfield about 10 miles northwest of Bloomington near the town of Ellettsville. Jill was no where to be found and her bike didn’t show any signs of damage to it.   A jogger while out on a morning job, spotted the bike the same day Jill disappeared and took it home.  When he heard about Jill’s disappearance on the news, he immediately contacted the police.

The Investigation into Jill Behrman’s Disappearance

The police searched the area where the bike had been found, but they found nothing useful for the investigation.  Whoever took Jill, clearly didn’t realize her bike held some value to it.   Jill’s family doubted that Jill actually rode her bike to the area it was found because it wasn’t one of her normal routes. To get there, Jill would have had ride through the downtown area and she hated riding through traffic.  Plus, if she had actually ridden downtown, logically someone would have spotted her.  But the leader of the bicycle club Jill belonged to, Dr. Houz, rode the route and said that it was possible for Jill to take that route and be back home in plenty of time to arrive at work by noon.   The direction of Jill’s route is one of the keys to this case.

Another witness came forward and stated that at approximately 8:30 a.m. on the morning of May 31, in the North Maple Grove Road area, he saw a plain white “commercial looking” Ford van driving slowly past his driveway on North Maple Grove Road, heading south. According to this witness, two men were inside the van. This witness saw the van two additional times that morning. and later identified the van as “exactly like” a Bloomington Hospital van. In addition, a man named Robert England came forward and said he saw a woman matching Jill’s description riding her bicycle north of Bloomington on North Maple Grove Road at approximately 10:00 a.m. on the morning of her disappearance.

Six days after Jill’s disappearance, a detective took his bloodhound,  Sam, out along the north route about a half-mile south of where Jill’s bike was found.  Sam was able to pick up Jill’s scent and continued to follow the northern route to where her bike was found.  Sam picked up Jill’s scent crossing highway 37, even though Jill’s parents said she hated crossing highways.  However, it never found her scent south of her home.

What Happened to Jill Behrman?

Listen to “The Murder of Jill Behrman” to find out. 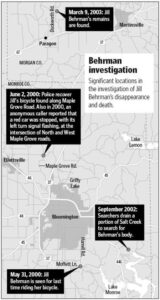 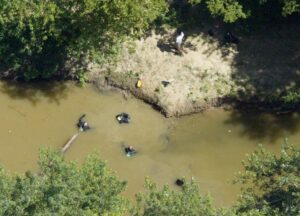 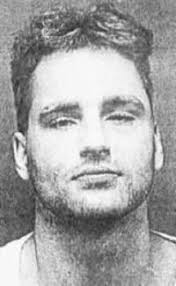 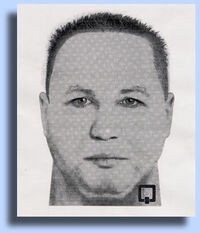