16-year-old Danna Walsh was raped and murdered in Northern California in 1984. Her crime went unsolved until another victim of Jackie’s who was kidnapped, raped, and left for dead, managed to survive and was able to give the police enough information for him to be arrested. Although he was only convicted of one murder, he confessed to his family that he killed more girls and some believe he is responsible for the unsolved murder of two young girls unsolved murders in the area.

Listen to "The One That Got Away" 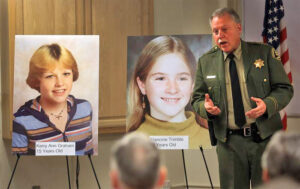